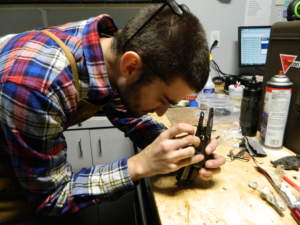 For the past several years, Shot Spot has offered the community a unique and exciting experience for those wanting to enjoy a shooting range, or who are shopping for guns, clothing, hunting supplies, and more. Now, with the addition of Master Gunsmith Cody Lawrence, a Pennsylvania Gunsmith School Alumni, Shot Spot’s family and professional services continue to grow and prosper.

Born an hour east of Pittsburgh, Pennsylvania, Lawrence always had a knack for fixing things. While growing up, he was constantly taking things apart and putting them back together to see how they worked. “I always tinkered with things – pretty much anything I could get my hands on that was old and broken to see if I could get it working again and figure out how it worked,” he said.

When Lawrence was old enough to hunt with his dad, his interest in the mechanics of guns was born. He began reverse engineering them and learning the fine details of how they function. It soon became a passion. “Eventually in my middle school years I realized there are actually jobs for this,” he said. “I already loved doing it, but I realized one day I could get paid for it.”

When he was a freshman in high school, Lawrence enrolled in the Pennsylvania Gunsmith School, one of the top two schools in the country to learn the trade.

Following his first summer after graduating from high school, Lawrence moved to Pittsburgh and began his training. During the sixteen-month course, he learned all aspects of making and repairing firearms. Lawrence emerged an expert with the training to back it up. Since graduating from the school in February 2016, he has made two custom riffles from scratch for himself.

Soon after he completed the gunsmith rifles Lawrence joined the Marines. After two weeks in basic training, however, a shoulder injury curbed his military career and he returned home to seek a position as a gunsmith.

While looking at job openings around the country, Lawrence discovered Shot Spot in Carrollton. “I got to talking to John Paulk (Shot Spot owner), came down for an interview in early June, then moved down and started my first day June 18th,” he said.

Although Lawrence is a master of his craft and has gained much experience as a gunsmith, he said there are always challenges and new things to learn. “There’s not a day that goes by that I don’t learn something,” he said. “If you talk to a gunsmith who has been doing this for forty or fifty years he will tell you the exact same thing.”
Something that continues to surprise him, Lawrence said, is the immense assortment of ways people find to damage their firearms. “Sometimes people bring things in and I’m like, ‘Is this even possible?’” he said.

As far as his work in what can be a dangerous profession, Lawrence said he grew up learning to respect guns and not to fear them. “What I feel like is important is for kids to learn how to be safe with firearms and to be comfortable with them,” he said. “I was never afraid of them because I knew how to be safe with them.”
One of Lawrence’s hobbies is target shooting, and therefore one of his dream guns is a Remington 700 with a ‘match grade’ barrel. “It’s a good 1,500 yard gun,” he said.
Lawrence, at the ripe old age of twenty, is now deep into a career many people would dream of, and he loves it. He said every day working in his shop at Shot Spot is an excellent day for him. “I really really do like this company,” he said. “We are very forward-thinking.”

One thing that makes Shot Spot more progressive than other gun stores/ranges, Lawrence said, is that they cater to their female customers. “We hear plenty of stories about a guy and his wife walking into a gun store looking for a gun for her, and the clerk only talking to the guy,” he said. “We don’t do that here. We find out who the firearm is going to be for and we like to talk to that person.”
For all customers, Shot Spot offers an “excellent rental program” for anyone who wants to use the range to try out different firearms in order to discover which is best for them.
“We rent by caliber not by specific firearms,” Lawrence said. “If you shoot a 9mm handgun, and after a while you decide you don’t really like it, you can go back to counter and swap it for another 9mm at no extra cost.” This, Lawrence said, allows a person to find the right gun for them – one that they will enjoy, feel comfortable with, and be accurate with.
“One thing I always grew up learning is if you have a gun that hurts or you don’t like to shoot it, you’re not going to shoot it, and you’re not going to be good with it,” he said. “If the time comes and you have to defend yourself, you simply can’t.”

For a beginner gun owner, Lawrence said he recommends a Glock. “Glock 19 is the most popular Glock in America,” he said. “It’s 100 percent concealable. People my size can conceal it on them, and you would never know. I know a lot of guys and women who carry the Glock 19.”

Shot Spot carries a large variety of Glocks, and Lawrence said the range is “the best range setup” he’s ever seen. “The electronics are really nice; the range officers are very attentive and helpful and know what they are doing. They are all NRA certified,” he said. “The range also has grates in the floor so you’re not slipping all over the place on brass when you’re shooting.”

Besides being a state-of-the-art gun shop and range, Shot Spot is also a clothing store, an outdoors store, and a rental space for events. In addition, they recently added a chef, Leigh Thornton, who makes full meals as well as bakery items daily (menu is available on their website). Lawrence said the food is delicious the dining area provides a great environment. “It’s fantastic food.” he said, “Also, anyone can come in during the week and order food and eat without making any other purchases.”